At Harborne Academy, every student belongs to one of our four Houses throughout their time with us. These Houses are named after famous people associated with Birmingham, some details of which are outlined below.

Houses compete with each other throughout the year to score house points through various events, such as House quizzes and sporting events. In previous years, Houses accruing the most points have been rewarded with House parties, trips out of the Academy and a range of other rewards.

An eighteenth century business man and engineer who introduced the steam train (with James Watt) and produced coins among many other things.

Part of the large Cadbury family. Maybe less well known, however she worked tirelessly to help the poor and gave away her great fortune.

A woman who was born very wealthy however she gave away much of her land and fortune. She presented the city of Birmingham with the gift of Cannon Hill Park which was available for the public to use and still is today. Also gave land for Small Heath Park and contributed to the building of Birmingham School of Art.

Dyslexic and attended a school for students considered beyond teaching (PRU). Speaks out for Amnesty International against homophobia in Jamaica. He turned down an OBE on the grounds that it referenced ‘Empire’. He has an honorary doctorate from Birmingham University and is patron of Aston Villa’s website! 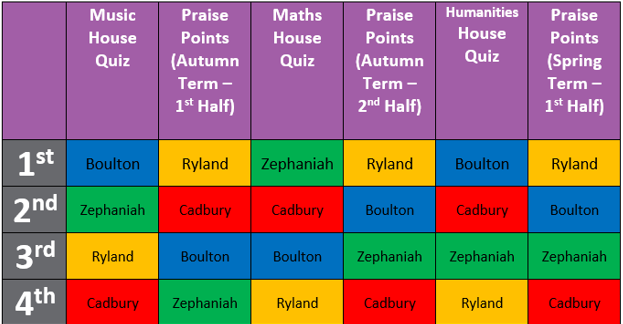 Each praise point is worth 1 point.

The House with the most praise points at the end of each term are rewarded with a House Party. Food, drinks and music (chosen by the students) are provided.

Stopping and parking outside the Academy

View Full Calendar
Back to Top